Lots in the press of late (drummed up by this interesting paper) about how judges should not judge acts of war by the standards of the common law tort of negligence or the requirements of article 2 ECHR.  I agree that personal injuries sustained in war should be the subject of no-fault compensation (as they are via AFCS) and should be non-justiciable such that the commander on the ground should not worry about the MOD being sued depending on his tactical and strategic choices and commands.  The Supreme Court (by a thin majority) have refused to strike out claims for personal injuries suffered in battle conditions because they wanted a trial judge to make findings of fact before the courts come to a final view.  In particular these findings are to assist in the teasing out of the question of whether a procurement decision made many moons before the war (i.e. to buy some snatch land rovers) can be held negligent and/or a breach of article 2 such as to justify an award of damages for an injury suffered because it is alleged that insufficient armoured protection was offered by the said land rovers in battle.

The State's decision about what tanks to buy and how armoured they should be is no more justiciable than a company commander's decision about who to send into battle with what weapons in the heat of the action.  The Courts have no business asking independent experts to offer them opinion evidence in order to decide whether HMG should have bought and deployed the big tanks rather than the small tanks.  These are questions absolutely vested in the Executive supervised by the Legislature.  These are not questions of law, but of competing priorities for the public purse and fine judgments about what military equipment works best in different environments.

Who knew before Bushs Snr and Jnr had their bright ideas that our Cold War trained and armed military would spend 20 years in the Iraqi and Afghan deserts?  Judicial hindsight can often be a dangerous thing, but it will utterly overreach itself if it starts to judge procurement decisions made in the late 1980s against the actual events of the next 20-30 years.

The Rule of Law requires Judges to oversee the Executive.  Judicial Review is a marvellous thing which is reduced or undermined at our peril.  But Judges deciding whether to give the State's foot soldiers compensation based on their master's decisions many moons ago is a step too far.  That is a matter for political oversight in the select committee and for the no-fault compensation scheme which exists for members of the armed forces (which should dish out common law damages in return for immunity for the Crown) and not for the court room.

The Lawyers have had a good war so far,  the counter-terrorism measures, the immigration strictures, rendition, secret prisons and the never ending public inquiries have been a boon for our human rights legal sector.  But let us not get carried away.  Their are limits to the judicial power and it is time to start applying them.  Best the Judges get in first to limit their own role using common law immunity or else they may find Parliament intervening with a statute. Our constitution requires harmony between its component parts and this is just the sort of issue over which a war of words could break out.

Judges take heed, the politicians (and the Chiefs of Staff) are speaking.

Posted by A Barrister in London at 21:16 3 comments: Links to this post 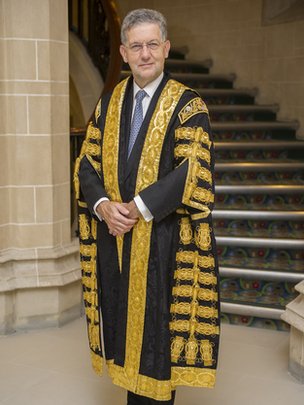 Lord Hodge, 'stolen from Scotland' for the Supreme Court to replace Lord Hope VP (replaced as VP by Lady Hale).  Might be one of the last Scottish appointments before secession?  Hope not (on both fronts).

Then off they processed for the Abbey Service and LC's breakfast, P and VP in the lead: 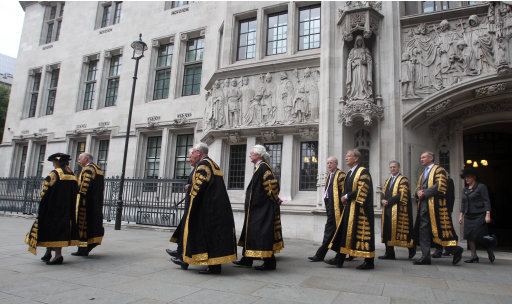 Posted by A Barrister in London at 08:42 No comments: Links to this post