SCOTTISH INDEPENDENCE IS NOT A MATTER FOR THE SCOTTISH PARLIAMENT Before Alex Salmond gets too excited he should recall that there are only two ways in which Scotland can obtain independence - UDI or an Act of the Westminster Parliament.  The Union between England and Scotland is a reserved matter under the Scotland Act 1998 and the Scottish Parliament cannot pass an Act severing the Union (not least because the Union was created by an Act of the Westminster Parliament).  Some might argue that a referendum of the whole UK population would be politically necessary before Westminster could pass such an Act.

Mr Salmond's referendum would only authorise him to open negotiations for such an Act to be passed by the UK Parliament (which would probably also be a Treaty between the two new states) and it would not automatically lead to independence (save for UDI, which would seem unlikely and would also breach international law and would probably lead to Scotland finding it difficult to join the EU, especially if Catalonia thought it could do likewise).  Once such terms for independence were agreed with the UK Government, especially relating to how much they would loose in subsidy, defence, foreign affairs, exports, oil revenues, gold reserves etc. etc. etc. it may well be that independence would not look quite so rosy.......


The following aspects of the constitution are reserved matters, that is—
(a)the Crown, including succession to the Crown and a regency,
(b)the Union of the Kingdoms of Scotland and England,
(c)the Parliament of the United Kingdom,
(d)the continued existence of the High Court of Justiciary as a criminal court of first instance and of appeal,
(e)the continued existence of the Court of Session as a civil court of first instance and of appeal

Posted by A Barrister in London at 10:23 No comments: Links to this post

Should a Coroner's Jury be permitted to indict?

A Coroner's Jury is the last remnant of the Grand Jury, the men of the County who used to report what crimes had been commited in the local area, since the last time the King's Justices visited on circuit.  Still used widely in the USA, but abolished here in 1933 (1984 in Nova Scotia!) prosecutors would have to convince the Grand Jury that there was sufficient evidence to indict the proposed defendant, before a trial could take place (now replaced by committal proceeding or 'sending the case to the Crown Court').  In the case of a death, it was for the Coroner's Jury to decide whether or not someone should face an indictment (a true bill) for an unlawful killing.  Coroner's Juries lost this power in 1977 and now they cannot frame their verdict so as to blame any named person for the death. Hence the Tomlinson Jury could not name PC Harwood.  Frankly (and I have done many jury inquests) I have long thought that the whole system, even with the improvements since the introduction of the Article 2 Middleton style inquest, is a waste of time.  The most which can result from an Inquest is (a) a critical report from the Coroner, which can be ignored (although must be responded to by the public bodies concerned) (b) the gathering of useful evidence for other proceedings and (c) some form of closure or catharsis for the family.  The Coroner's inquest does not guarantee a prosecution being launched or civil compensation.  I recognise that it is a form of investigation into a death and that positive things often come out of an inquest - but to what real tangible end?

In the Tomlinson case, a jury found beyond reasonable doubt that a Police Constable had unlawfully killed a citizen.  They were directed by a Senior Old Bailey Criminal Judge.  Usually when a jury, directed by an Old Bailey Judge, return a verdict that somebody has been killed, beyond reasonable doubt, the defendant usually goes to prison.  It seems to me that to make Coroner's Inquests meaningful, in every case where an indictment might be on the cards, the Coroner should summon a jury and direct them to consider not only their verdict but also whether anybody should be indicted for the death - this could include corporate manslaughter or death by dangerous driving as well as the usual homicide offences.  The CPS could subsequently drop the prosecution if not convinced by the indictment or if a witness dropped out (although they would have to tread carefully so as not to seem to be dismissive of the Jury's decision to indict) and the Coroner would be able to direct the jury not to consider an indictment where there is insufficient evidence, just as a Coroner can direct that certain verdicts are not available on the evidence.  At least the Jury's hard work would be worthwhile, would result in something tangible and would give the family some hope that justice might be served in the future.

If the Police had already opened an criminal investigation - then I do not suggest that an inquest should supplant the usual criminal investigative and trial process - it should only be in cases where there has been no criminal investigation that the Jury has the power to indict.  But then a full inquest following a criminal trial is very very rare.  The Jury's power would only be useful where the CPS or Police had neglected to act or where the inquest had uncovered new evidence (happens more often than you might think where an alert and efficient Coroner is on the case). Often the HSE use inquests to flush out evidence to use in health and safety prosecutions - I suspect the jury's power to indict would be very useful to the HSE, likewise for the police in road traffic cases.  If an indictment was open to the jury, I would permit the advocates to address the jury and the Coroner on the facts and on whether an indictment should be preferred (presently and bizarrely - advocates can only ask questions of witnesses (which must not imply guilt or blame) and address the Coroner on the form of verdict to leave to the jury  - or if sitting without a jury, which he or she should consider).

Inquests were to be improved by the Coroners and Justice Act 2009, but the Coalition has shelved most of that - most tragically the new office of Chief Coroner is going to be burnt in the bonfire of the quangos (HHJ Thornton QC of the Tomlinson inquest was going to have the job) unless the House of Lords can force a re-think - it is high time that a centralising force gives some focus and consistency to Coronial work and lets hope that the Coalition changes its mind......

Announced - Sumption and Wilson to go to Supreme Court

After months of speculation Downing Street has made the announcement.  There has been unfair criticism of Sumption delaying his appointment until he has completed his professional commitments; barristers do not return cases (indeed cannot) to fit in with their judicial careers and Sumption is right to complete his professional commitments before he takes his appointment.  His clients are entitled to their lawyer of choice and to hold Sumption to his professional duty. Note that Lord Collins is going to fill in in retirement whilst the Court waits for Lord Sumption (the first Barrister to straight go to the UK's highest court in 62 years - Viscount Radcliffe (as he ended his career) was the last.)
Wilson LJ's appointment is also to be welcomed - he has handed down many excellent judgments and not just in his core field of family law. Jonathan Sumption OBE, QC will take up the appointment as soon as his existing professional commitments are completed, on a date to be agreed with the President of the Supreme Court.
Following his retirement Lord Collins of Mapesbury will sit as an additional Judge of the Supreme Court.
Posted by A Barrister in London at 08:41 No comments: Links to this post

THE CPS SHOULD HANG ITS HEAD IN SHAME

The CPS should have charged PC Simon Harwood  - see here.

& now they certainly should...... well done that jury....the lamp that shows that freedom lives.... 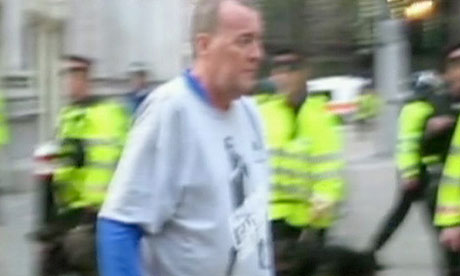 UPDATE - CPS to review their decision not to prosecute following jury's verdict - http://blog.cps.gov.uk/2011/05/cps-to-review-decision-on-charges-over-death-of-ian-tomlinson.html
Good, make it quick and make it just.....
Posted by A Barrister in London at 16:07 No comments: Links to this post

I fully support this campaign...